TORONTO, March 9, 2017 /CNW/ - Canada's leading banks and insurance companies today announced their intent to create a fund to invest up to $1 billion in Canadian businesses over the next decade to bolster growth and innovation. 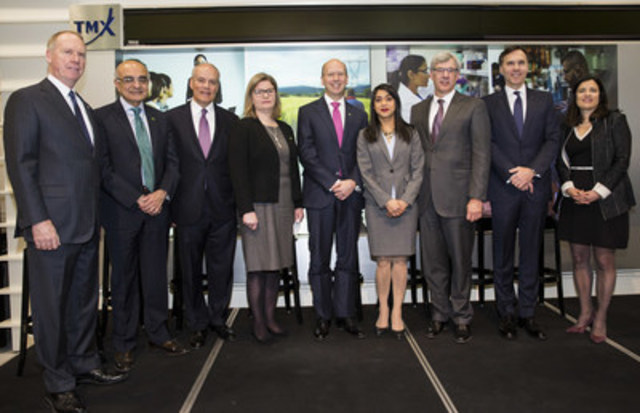 The Canadian Business Growth Fund will make investments in small- and medium-sized Canadian companies seeking long-term, patient, minority capital to finance continued growth and to allow the scaling up of existing operations. Typical investment amounts in each company will range between $3 million and $20 million. Importantly, the fund will facilitate mentorship and access to talent pools to help these businesses achieve their full potential.

The fund is expected to have initial capital commitments of over $500 million, with the possibility for future contributions of up to $1 billion in future years, depending upon both demand for investment and the fund's performance. Initial participants include: BMO Financial Group, CIBC, Royal Bank of Canada, Scotiabank, The Toronto-Dominion Bank, Manulife, Sun Life Financial, Great-West Life, National Bank of Canada, HSBC Bank Canada, ATB Financial, Laurentian Bank of Canada, and Canadian Western Bank. Other institutions are considering involvement and a broad range of financial institutions will be able to invest in the fund when it is formed.

The fund will operate as an independently managed entity, supported by its investors with its own board of directors and management team, with an objective of having offices and personnel across Canada. The board will be comprised of independent directors and representatives from the initial investors. The Fund will begin a search for an independent chair, along with a chief executive officer, with the intention to have an executive team in place to start deploying capital within the next 12 months.

The executive team will also be tasked with developing an advisory network to provide mentorship, thereby closing some of the knowledge gaps preventing many mid-sized companies from achieving their full growth potential at home and globally. The aim is to help business founders maintain effective control of their companies to execute on their vision as they grow and expand.

This announcement follows the publication of the second report from the Minister of Finance's Advisory Council for Economic Growth, which identified a gap in the Canadian market for long-term capital and recommended the creation of a private sector-led growth fund for minority equity stakes in companies. One of the goals of the Fund is to ultimately help Canadian companies grow outside of Canada, creating a vibrant, innovative and diversified economy that will spur the creation of jobs and growth for our country.

A further announcement will be made in due course.