TORONTO, Feb. 24, 2017 /CNW/ - CIBC (TSX: CM) (NYSE: CM) -- Retired Canadians aged 50 and over are finding that unanticipated costs, health issues and higher than expected tax bills are their biggest surprises in retirement,  finds a new CIBC poll. Complicating the situation for these retired Canadians is that many left the workforce before they expected to, putting pressure on their retirement income and leaving many wishing they had started planning sooner. 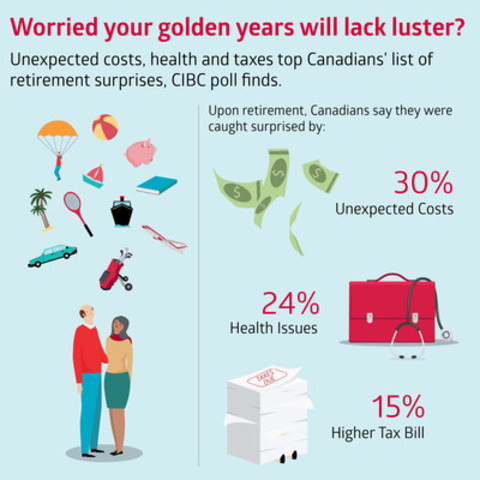 "There's a lot we can learn from Canadians about their retirement experiences to help us steer clear of costly surprises," says  David Nicholson, Vice-President, CIBC Imperial Service. "Heading into the final weekend of RRSP season, it's important to remember retirement planning is much more than checking your annual RRSP contribution off the list. The key to mitigating surprises or coping with the cost of health issues is planning ahead for the life you want to live."

"Many Canadians underestimate their spending in retirement, or don't realize that they may have to retire earlier than they expect to leaving them unprepared to manage higher expenses than expected on a lower income than planned," says Mr. Nicholson. "While travellers can expect to spend more, those staying put may be surprised by the costs of all that free-time to explore new interests or may dip into savings for renovations put off during their working years."

Taxes can impact retirement cash flow Before 2009, when Tax Free-Savings Plans (TFSA) were introduced, Registered Retirement Savings Plans (RRSP) were among the few tax-efficient retirement savings vehicle. The poll indicates that some retirees bulked up on their RRSP savings, and are now facing a surprising tax bill as they convert their RRSP income into Registered Retirement Income Funds (RRIFs). As a result, some may also experience claw-backs on income-tested government benefits, which could have been avoided with earlier planning.

"Making the transition from saving for retirement to funding retirement can be complicated," says Mr. Nicholson.  "Whether you retire earlier, later or not at all, it's important to work with an advisor to understand how your income will be taxed at different stages of retirement, and ensure you're not leaving any of your hard earned money on the table."

* Total of 30% for "Unexpected Expenses"

Top three things Canadian retirees aged 50+ who would go back and change anything pre-retirement:

Time of retirement for Canadians 50+:

CIBC Retirement Surprises Poll Disclaimer:
From February 6 to 9, 2017 an online survey was conducted among 662 retired Canadians over the age of 50  who are Angus Reid Forum panellists. The sample outgo was balanced on age, gender and region to Census Canada. For comparison purposes, a probability sample of this size has a margin of error of +/- 3.8%, 19 times out of 20.