TORONTO, April 5, 2017 /CNW/ - CIBC (TSX:CM) (NYSE:CM) -- Celebrate Canada's sport this season with new limited edition Grandeur™ hockey player collector coins featuring 20 of the biggest names in the game. CIBC is proud to announce that it is the exclusive Canadian distributor, in collaboration with The Upper Deck Company, producer of premier sports cards and authenticated sports memorabilia. 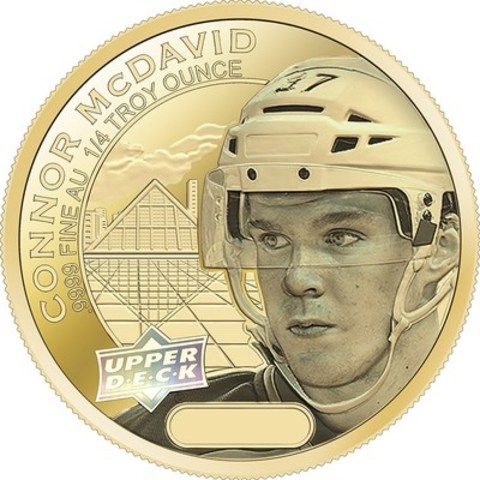 "Hockey is more than a game to Canadians, it's part of our identity, which is why we're thrilled to collaborate with Upper Deck to celebrate some of the most popular players to ever hit the ice," says Kam Dhadwar, Executive Director, Alternate and Retail Solutions Group, CIBC. "The intricate detail and limited mintage on these gold and silver coins really highlights the hockey heroes of our past and our future."

These coins also bring new and unique elements to the world of coin collecting with "blind bag" packaging and serial numbers traditionally used with trading cards; meaning that clients will not know which finish, player, or number they have until the sealed package is opened. The first trading coin of its kind in the market, you can trade your hockey player collector coins with friends, family and other hockey aficionados to collect all 20 for a complete set.

"We knew instantly that we were onto something special," said Jason Masherah, president of Upper Deck. "This incredible new coin collection exemplifies Upper Deck's core tenets of quality, innovation and authenticity and takes collecting to an entirely new level that hockey fans and coin enthusiasts around the world are sure to treasure for many years to come."

Grandeur™ Hockey Coins may be purchased individually in a sealed blind pack for $100 or as a collector box with four randomly inserted coins for $499. The collector box includes one of three rarer coins and comes with a display that holds up to 20 coins.

Coins can be ordered online or at your local banking centre today, retailing at C$100 each or C$499 for the collector box set equipped with four pre-packaged trading coins.

The 20 hockey greats featured include:

Last year, CIBC also announced its partnership with top draft pick and hockey phenomenon Connor McDavid, as well as the Canadian Hockey League (CHL), as part of the bank's commitment to inspire and connect Canadians through the power of sport.

About CIBC
CIBC is a leading Canadian-based global financial institution with 11 million personal banking and business clients. Through our three major business units - Retail and Business Banking, Wealth Management and Capital Markets - CIBC offers a full range of products and services through its comprehensive electronic banking network, branches and offices across Canada with offices in the United States and around the world.

Ongoing news releases and more information about CIBC can be found at www.cibc.com/ca/media-centre/ or by following on Twitter @CIBC, Facebook (www.facebook.com/CIBC),Instagram @CIBCNow and LinkedIn (www.linkedin.com/company/cibc).

About Upper Deck
Upper Deck, headquartered in Carlsbad, Calif., is a worldwide sports, gaming and entertainment company built on the pillars of quality craftsmanship, authenticity and innovation with a dedication to creating products that turn memorable moments into collectibles. Upper Deck is the exclusive provider of NHL trading cards, and is home to the world's greatest athletes including Connor McDavid, Michael Jordan, Wayne Gretzky, Tiger Woods and LeBron James.

For further information: Melissa Lantsman, Communications and Public Affairs, CIBC at 416-780-4587 or Melissa.Lantsman@cibc.com
Back