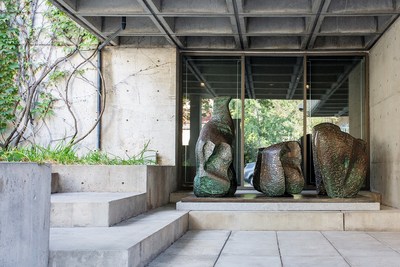 Originally installed near Dominion Square, in the forecourt of the Montreal CIBC Tower, the artwork is now on permanent display in the Museum's newly expanded Sculpture Garden, in front of the Liliane and David M. Stewart Pavilion. The donation of this large-scale bronze sculpture is a major contribution to the MMFA's extensive holding of the artist's works, and marks the artist's significance in the history of Montreal.

Purchased from the artist by CIBC in 1962, Three Piece Reclining Figure No 1 was the first large-scale outdoor sculpture by Henry Moore to be installed anywhere in Canada. It exemplifies the English artist's well-known talent for blending human and natural forms. The gift to the MMFA is a fitting addition to the major collection of 40 works by Moore, including six smaller bronze sculptures of reclining figures, held by the Museum. It also highlights both institutions' commitment to preserving Montreal's public art.

Nathalie Bondil, Director General and Curator in Chief, MMFA, said, "A huge thank-you to CIBC! Thanks to this major gift, the biggest ever made to its modern collection, the MMFA will enhance the life of our citizens with a spectacular addition to public art in Montreal. We are very happy to add this masterpiece to our Sculpture Garden. For now, this abstract Odalisque is happily nestled within the modern architecture designed by Lebensold in 1976. Once the exhibition La Balade pour la Paix has ended on October 29, the sculpture will be prominently displayed on Sherbrooke St. West, close to Du Musée Avenue, and not far from Crescent Street.''

CIBC has been a major donor to the MMFA, particularly during the Museum's fund-raising campaigns between 2008 and 2012. It has also gifted two important artworks by Jean-Paul Riopelle: a painting, Homage to Grey Owl (1970), in 2001 (on loan this fall as part of the exhibition Mitchell / Riopelle: Nothing in Moderation at the Musée national des beaux-arts du Québec), and another bronze sculpture, Owl II (1970) in 2002.

"We've had the great privilege of showcasing this Henry Moore sculpture at our Montreal office and we credit our predecessors with having the foresight to acquire this masterpiece from one of the 20th century's greatest sculptors," said Sylvain Vinet, Senior Vice-President and Region Head, Eastern Canada, CIBC. "And now, in recognition of CIBC's 150th birthday, and Montreal's 375th, we are honoured to donate it to the Montreal Museum of Fine Arts, where it can be enjoyed by everyone while preserving its cultural legacy."

Timeline of the Sculpture's History

Moore's work was hailed as a masterpiece. Dr. Evan Turner, then the Director of the Montreal Museum of Fine Arts said, "Not in one hundred years has Montreal seen such a distinguished new work of public sculpture. [CIBC's] new Moore is, easily, the most important single work of contemporary public sculpture on exhibit anywhere in Canada."

Henry Moore's Semi-abstract Art
Figures and landscapes animate Three Piece Reclining Figure No 1 (1961-1962). The human form is divided into three. The leftmost piece rises vertically to a wedge shape that looks like a head. Two large concave depressions on either side of the "spine," boulder-like forms in the middle section, call to mind the lower torso and hips. The sculpture's smallest piece is composed of two parallel rounded shapes that may be interpreted alternately as the peaks of rolling hills or bent kneecaps.

This acquisition is one of only two three-piece-reclining-figure sculptures Moore created between 1961 and 1963. From an edition of seven, with casts in the Los Angeles County Museum of Art, the Baltimore Museum of Art and the Tate Gallery, London, this bronze sculpture stands out as a particularly compelling example of Moore's self-professed obsession with semi-abstract reclining figures, the subject to which he would most consistently return throughout his career.

An Enriched Collection of Works by Henry Moore at the MMFA
Thanks to the generosity of long-time benefactors at CIBC, this important donation enriches the MMFA's collection of more than 40 works by Henry Moore. This collection includes such drawings as Reclining Nude and Figure Studies (1937) and other bronze sculptures, such as Large Totem Head (1968), which welcomed visitors in front of the Michal and Renata Hornstein Pavilion for several years, Mother and Child (1939) and Woman (also called La Parze) (1957-1958). Three Piece Reclining Figure No 1 will join the bronze Sculpture Upright Motive No 5 (1955-1956) in the CGI Sculpture Garden and Max and Iris Stern Garden on Bishop Street, and some ten works by Henry Moore now on display elsewhere in the Museum.

Acknowledgements
The Museum of Fine Arts of Montreal wishes to thank CIBC for this historic donation of the monumental artwork Three Piece Reclining Figure No 1 by Henry Moore, which will join the Museum's collection of international art, and also to recognize this partner's outstanding support for its educational programs.

About the Montreal Museum of Fine Arts
The MMFA welcomes a million visitors annually. Quebec's most visited museum, it is one of the most popular museums in Canada, and ranks eighteenth among art museums in North America. The Museum's original temporary exhibitions combine various artistic disciplines – fine arts, music, film, fashion and design – and are exported around the world. Its rich encyclopedic collection, distributed among five pavilions, includes international art, world cultures, decorative arts and design, and Quebec and Canadian art. The MMFA complex includes Bourgie Hall, a 460-seat concert hall. The MMFA is one of Canada's leading publishers of art books in French and English, which are distributed internationally. The Museum also houses the Michel de la Chenelière International Atelier for Education and Art Therapy, the largest educational complex in a North American art museum, enabling the MMFA to offer innovative educational, wellness and art therapy programmes. mbam.qc.ca

About CIBC
CIBC is a leading Canadian-based global financial institution with 11 million personal banking, business, public sector and institutional clients. Across Personal and Small Business Banking, Commercial Banking and Wealth Management, and Capital Markets businesses, CIBC offers a full range of advice, solutions and services through its leading digital banking network, and locations across Canada, in the United States and around the world. Ongoing news releases and more information about CIBC can be found at www.cibc.com/ca/media-centre or by following on LinkedIn (www.linkedin.com/company/cibc), Twitter @CIBC, Facebook (www.facebook.com/CIBC) and Instagram @CIBCNow. 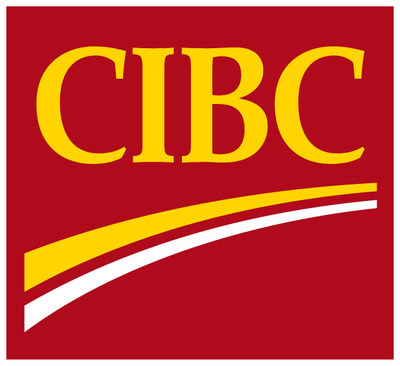