TORONTO, March 4, 2019 /CNW/ - Women are controlling a rising amount of wealth giving them increasing influence and control over the Canadian economy finds a new report from CIBC Capital Markets noting that this trend is going to continue. 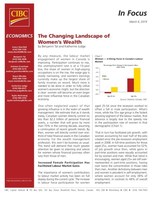 "More needs to be done in order to fully utilize women's economic might, but the direction is clear," says the report, The Changing Landscape of Women's Wealth, by CIBC Capital Markets economists Benjamin Tal and Katherine Judge. "Women will become an even larger and more influential force in the Canadian economy."

The report notes that since the 2008 recession, more women aged 25+ are working and actively participating in the economy. In fact, women in this demographic have accounted for 52 per cent of job growth in full-time positions since 2008 and have increasingly landed jobs in higher-paying fields, with almost one-third of women in those roles now. In addition, women over the age of 55 have seen labour market participation rates rise by almost twice the amount of men during this cycle.

With more women working and earning higher incomes, the historical structure of women's wealth has fundamentally changed and will only continue to grow.

"In families in which there is an employed woman in the core-working age demographic, women's earnings now account for a record-high 47 per cent of family income, almost double the share seen in the 1970s," the report says.

"Today 41 per cent of women (single, divorced, widows, and women responsible for investment decisions) control no less than $2.2 trillion of financial assets," the report says. "That number is expected to rise quickly, as the cohort of women with stronger labour incomes and retirees grows. We estimate that by 2028, women will control just under $3.8 trillion or more than one-third of total financial assets and more than double that number if we include real estate assets."

The report identifies a number of factors that may explain why women are gaining more economic clout. Women still outlive men and also tend to get married earlier resulting in married women and widows eventually controlling a significant amount of wealth. In today's world, there are more single women than divorcees and women are increasing their involvement in the workforce which suggests that women are staying single longer and resetting historical priorities in terms of starting a family and a career.

CIBC is a leading North American financial institution with 10 million personal banking, business, public sector and institutional clients. Across Personal and Small Business Banking, Commercial Banking and Wealth Management, and Capital Markets businesses, CIBC offers a full range of advice, solutions and services through its leading digital banking network, and locations across Canada, in the United States and around the world. Ongoing news releases and more information about CIBC can be found at www.cibc.com/ca/media-centre.