MONTREAL, Nov. 16, 2022 /CNW/ - CIBC today announced it is teaming up with the Montreal Canadiens to celebrate the ambitions of Quebecers via a new campaign: Au Coeur de nos célébrations (at the heart of our celebrations). 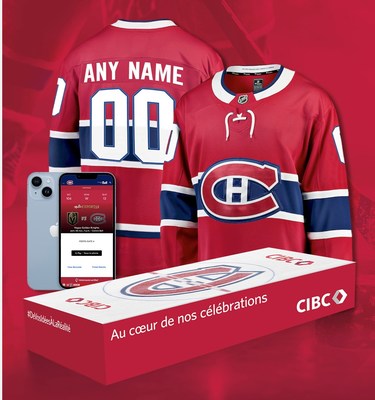 Building on its official partnership with the team, the bank is intent on highlighting the exceptional ambitions of Quebecers through a common passion: the Montreal Canadiens.

By visiting https://www.nhl.com/canadiens/fans/cibc-contest throughout November 2022, Habs fans from across Quebec will be invited to share their ambitions and possibly have them come true. Those ambitions could include skating on the Bell Centre rink, meeting Montreal Canadiens' former players, attending a game with three of your friends, or winning a VIP evening at a Canadiens' game.

(Visuals of the campaign available here)

"CIBC has been part of Quebecers' lives for a long time, and today more than ever we want to help make ambitions real. We're bringing our purpose to life through our partnership with the Montreal Canadiens as we provide unique experiences for Habs fans as we all cheer for our team. We're proud to be putting fans Au Coeur de nos celebrations," says Rosa Trunzo, Senior Vice-President and Regional Head, Quebec Region, Personal and Business Banking at CIBC.

Patrice Brisebois, former Montreal Canadiens' number 43, member of the 1993 team and now team ambassador, understands the drive and dedication needed to make ambitions real.  "It gives me great pleasure to see how much joy the Montreal Canadiens can bring to Quebecers, thanks to their partnership with CIBC. I hope that all fans can achieve their ambitions, big or small! How about a 25th championship for the Canadiens?"

Celebrating the achievements of our exceptional clients

Alongside this province-wide contest and as part of its Au Coeur de nos celebrations campaign, CIBC is also recognizing the outstanding charitable, personal and professional ambitions of its Quebec clients including:

Sandra Perron, a retired Canadian Army Major from Chelsea, who is giving back to her community by opening a center for female Army and RCMP veterans, as well as for wives of veterans.

Albine Mombanza from Lachine, who during the Covid-19 pandemic as a nurse worked three jobs, put in countless hours of overtime, achieved her ambition of becoming a homeowner.

Stories like these abound throughout the province. CIBC is proud to support the ambitions of Quebecers to make them come true, and to be at the heart of our celebrations.

CIBC is a leading North American financial institution with 13 million personal banking, business, public sector and institutional clients. Across Personal and Business Banking, Commercial Banking and Wealth Management, and Capital Markets businesses, CIBC offers a full range of advice, solutions and services through its leading digital banking network and locations across Canada, with offices in the United States and around the world. Ongoing news releases and more information about CIBC can be found at www.cibc.com/en/about-cibc/media-centre.html