Gift-buying budgets jump 8 per cent from 2016, with millennials boosting their spending by 39 per cent

TORONTO, Dec. 7, 2017 /CNW/ - Nearly two-thirds of Canadians say their holiday spending is out of control, a new CIBC (CM:TSX) (CM:NYSE) poll finds. Holiday shopping budgets are up 8 per cent from last year to an average of nearly $650, and Canadians plan on spending on average about another $300 on entertaining and other celebrations over the festive season. 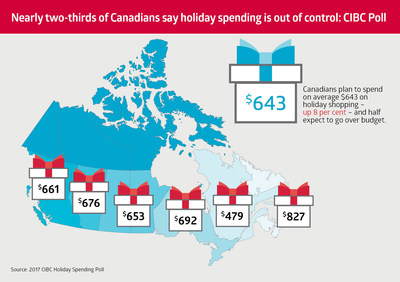 Yet, more than half (52 per cent) expect to go over budget, and two in five (41 per cent) admit they really can't afford the holiday spending, but feel pressured to participate, the poll findings show.

"While the holidays are meant to be a time to reconnect with loved ones, Canadians are telling us that they're secretly frustrated with the shopping, stress and overspending that can end up eclipsing the joy of the season," says David Nicholson, Vice-President, Imperial Service, CIBC.  "It's time to reset expectations, so the holidays can be enjoyed to their fullest. No tradition is set in stone. Take some time with friends and family to discuss new traditions that might better reflect your shared values and help to reduce the costs and stress of the holidays."

While most will use credit (59 per cent) and cash/debit (50 per cent) to cover their holiday bills, the poll finds that using rewards points or gift cards to offset expenses is growing in popularity, particularly among women, millennials and Atlantic Canadians.

"With as many three-quarters of Canadians conceding that they 'wish they could save more money' at this time of the year, it's clear we need to do things differently, put savings first, and find new ways to trim costs this season," says Mr. Nicholson. "While part of that means having tough conversations, it also means sticking to a firm budget and having a savings plan in place so that the holidays don't derail you from your goals."

The hectic shopping, excess spending, time crunch, and the pressure to give gifts – in fact, 'the entire holiday season itself'—are Canadians' biggest holiday irritants, the poll finds. As many as two in five (41 per cent) admit they can't afford the holiday spending, but don't want to be the Scrooge, who raises the idea of not giving gifts first, or know of at least one person who they wish would stop giving them a gift so they wouldn't have to give one back.

Fully half (50 per cent) of Canadians admit they only somewhat enjoy, or feel duty bound to participate in the gift-giving, including 9 per cent who say they hate giving gifts because it's too stressful and expensive.

The survey also showed that 38 per cent of Canadians have already changed a holiday tradition to reduce stress and spending, with 43 per cent setting a limit on gift-spending, 27 per cent agreeing to give gifts to small children, and 20 per cent opting for the single gift-exchange of a Secret Santa or Kris Kringle.

One in four (27 per cent) of them have done away with gift-exchange altogether, and 14 per cent have opted to get together for a shared experience in lieu of gifts.

Give the gift of cash

Cash or gift cards are this holiday season's hottest gifts, with more than half (56 per cent) putting it on their wish list. That's in line with an earlier CIBC Savings Poll that found many Canadians receive extra cash throughout the year, which could be used to bolster short- or long-term savings.

As well, the poll finds that nearly half (48 per cent) of those surveyed send money or packaged gifts by mail to loved ones over the holidays.

"Sending money electronically can be a great way to reduce stress and keep costs down," says Mr. Nicholson, who suggests a fast and easy way of sending money is via electronic transfers or no-fee remittance CIBC Global Money Transfer service.  "The best part is that you can immediately transfer that extra money into your savings account to get you closer to your savings goals and, ultimately, the bigger items on your wish list."

Average amount Canadians say they plan to spend on holiday shopping this year, by region:

Average amount Canadians say they plan to spend on holiday shopping this year, by age:

Percentage of Canadians who say they are likely to go over-budget this holiday season on all holiday related expenses, by age:

How Canadians describe their gift-giving personality, by age:

About the 2017 CIBC Holiday Spending Poll:

From November 27th to November 28th 2017 an online survey was conducted among 1,512 randomly selected Canadian adults who are Angus Reid Forum panellists. The margin of error—which measures sampling variability—is +/- 2.5%, 19 times out of 20. The results have been statistically weighted according to education, age, gender and region (and in Quebec, language) Census data to ensure a sample representative of the entire adult population of Canada. Discrepancies in or between totals are due to rounding.

CIBC is a leading Canadian-based global financial institution with 11 million personal banking, business, public sector and institutional clients. Across Personal and Small Business Banking, Commercial Banking and Wealth Management, and Capital Markets businesses, CIBC offers a full range of advice, solutions and services through its leading digital banking network, and locations across Canada, in the United States and around the world. Ongoing news releases and more information about CIBC can be found at www.cibc.com/ca/media-centre or by following on LinkedIn (www.linkedin.com/company/cibc), Twitter @CIBC, Facebook (www.facebook.com/CIBC) and Instagram @CIBCNow. 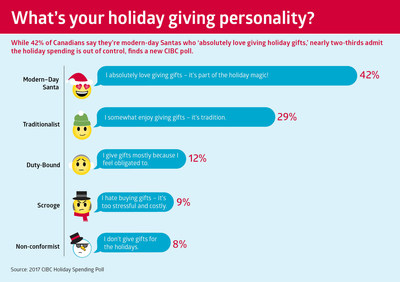 For further information: Jessica Botelho, Public Relations, 416-980-8859 or jessica.botelho@cibc.com
Back